Meetings between the Managing Owners, Mel Helm and Keith Quattrocchi, and other Astronomers with operational observatories. 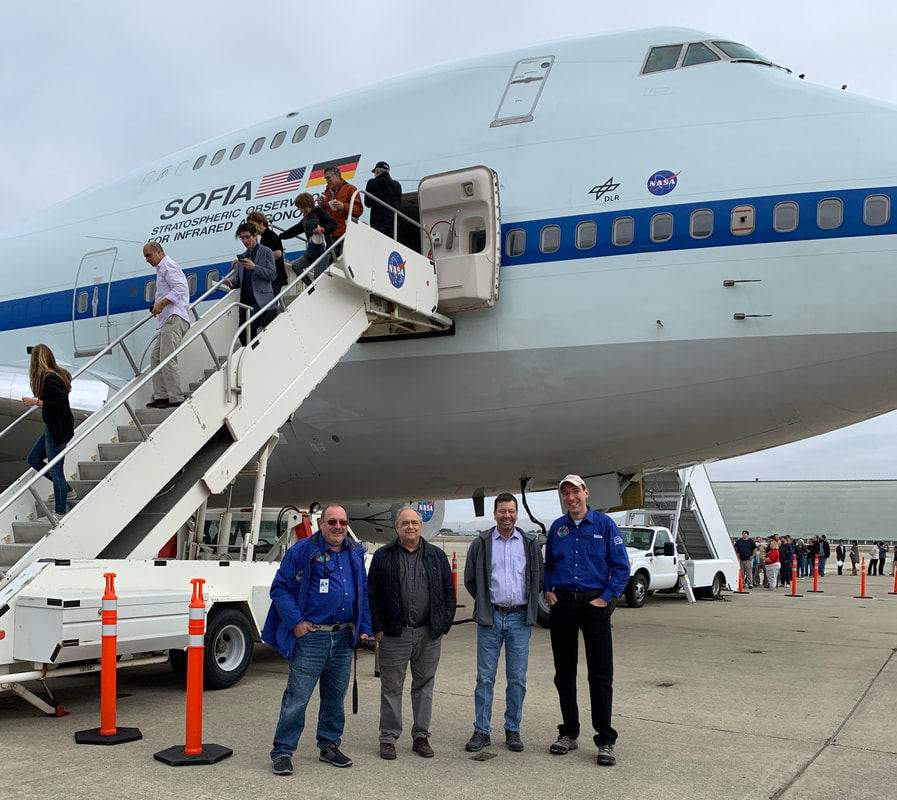 August 31, 2019:  From left to right: Jurgen Wolf, Keith Quattrocchi, Mel Helm and Karsten Schindler.  At SRO we have always taken pride in hosting the Astronomical Telescope of the University of Stuttgart (ATUS) at SRO.  This telescope is used for research and for testing equipment to be used on SOFIA, the modified high altitude 747 carrying a 2.7 meter infrared telescope.  The ATUS was established by the University of Stuttgart's Institute of Space Systems with support of the Stratospheric Observatory for Infrared Astronomy (SOFIA) and funded by the DLR Space Administration.  Dr. Wolf is a Professor of Astronomy and senior research scientist with with SOFIA and Karsten Schindler is a Support Astronomer at Deutsches SOFIA Institut (DSI) and a Professor at the Universität Stuttgart.  You can read about Dr. wolf at https://www.sofia.usra.edu/science/science-team/j%C3%BCrgen-wolf and about Dr. Schindler at https://www.dsi.uni-stuttgart.de/institut/mitarbeiter/schindler.en.html . 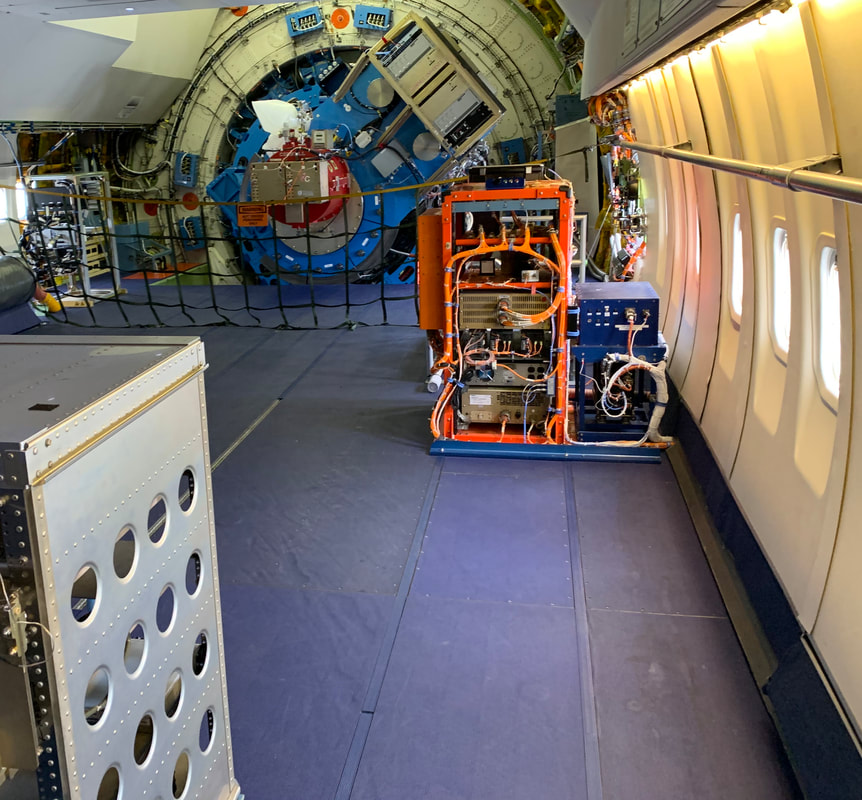 The Boeing 747 is packed with the electronics required to operate and collect data from the 2.7 meter infrared telescope. 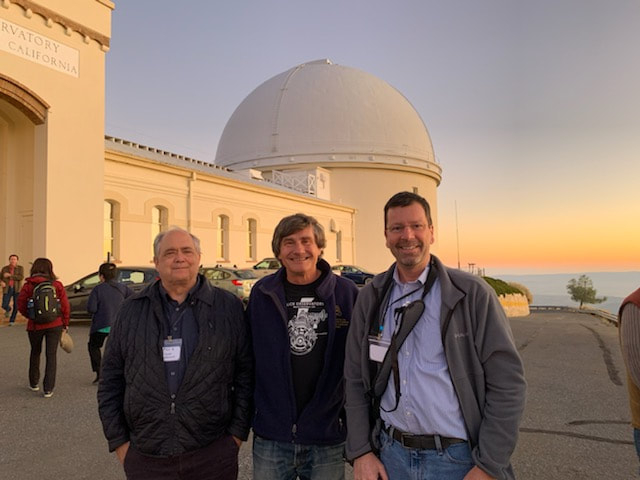 November 2, 2019:  Meeting Dr. Fillippenko for a tour of the Lick Observatory was a rare honor for Mel and Keith Quattrocchi. His many accomplishments as a Professor of Astronomy at U.C. Berkeley are too extensive to be repeated here, please see this link: https://astro.berkeley.edu/people/alex-filippenko/ . We spent time at the 2.4 meter Planet Finder, the 3 meter Shane Telescope, Dr. Fillippenko's Katzman Automatic Imaging Telescope (KAIT), and the Great Lick refractor. Dr Fillipenko was a scholar and gentlemen, patiently answering even the most uninformed questions we came up with!  He has a remarkable breadth and depth of knowledge and an uncanny ability to explain complex information in a way the layman can understand. It is no surprise having met him, that he has been elected best professor at UC Berkeley more often that any other professor. His list of accomplishments and discoveries is remarkable (see link above). 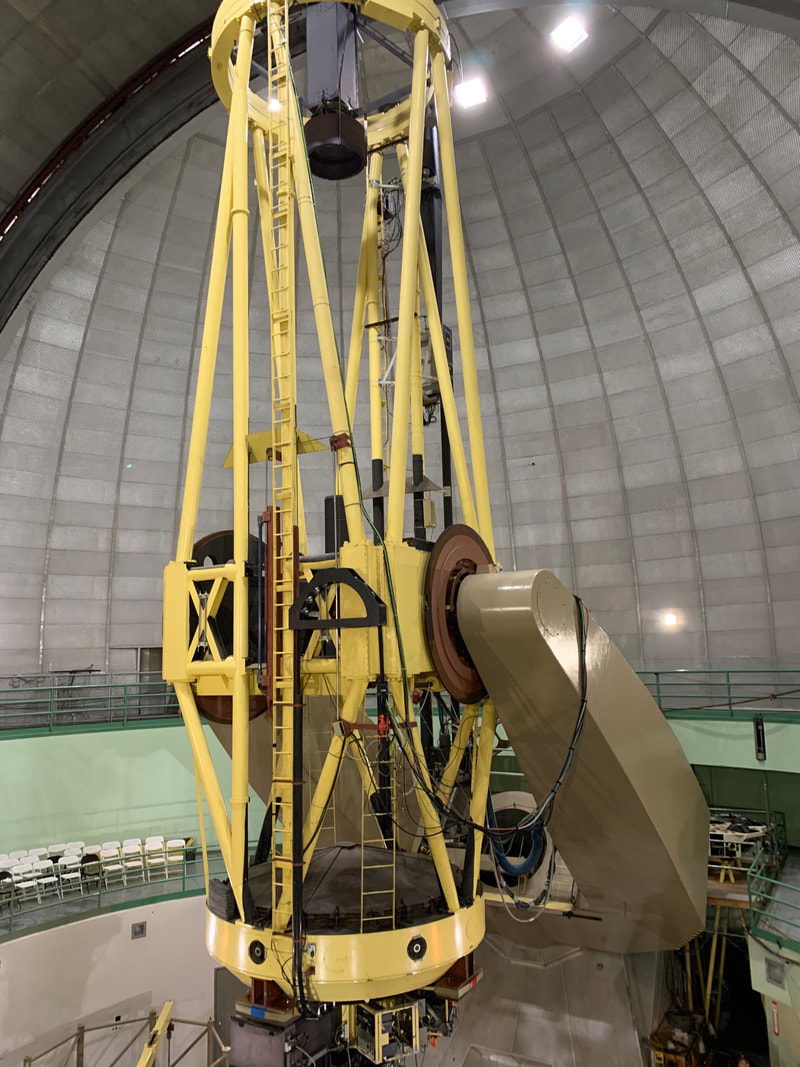 The famous C. Donald Shane telescope, with its 120-inch (3-meter) primary mirror.  It was the second largest telescope in the world when first built. It is housed in the Shane Dome on the Tycho Brahe Peak of Mt. Hamilton.  Its instrumentation includes the Hamilton spectrometer, the Kast double spectrograph, and the Shane AO adaptive optics system with laser guide star. The Shane 3-meter is a unique telescope because it was designed to meet many diverse research needs. It's equipped with multiple instruments and time on this telescope is highly sought. The type of research conducted includes the discovery of exoplanets, research on supernovae and measuring the expansion of the universe. It was the first mountaintop permanent observatory and the first telescope with laser guide-star Adaptive Optics. 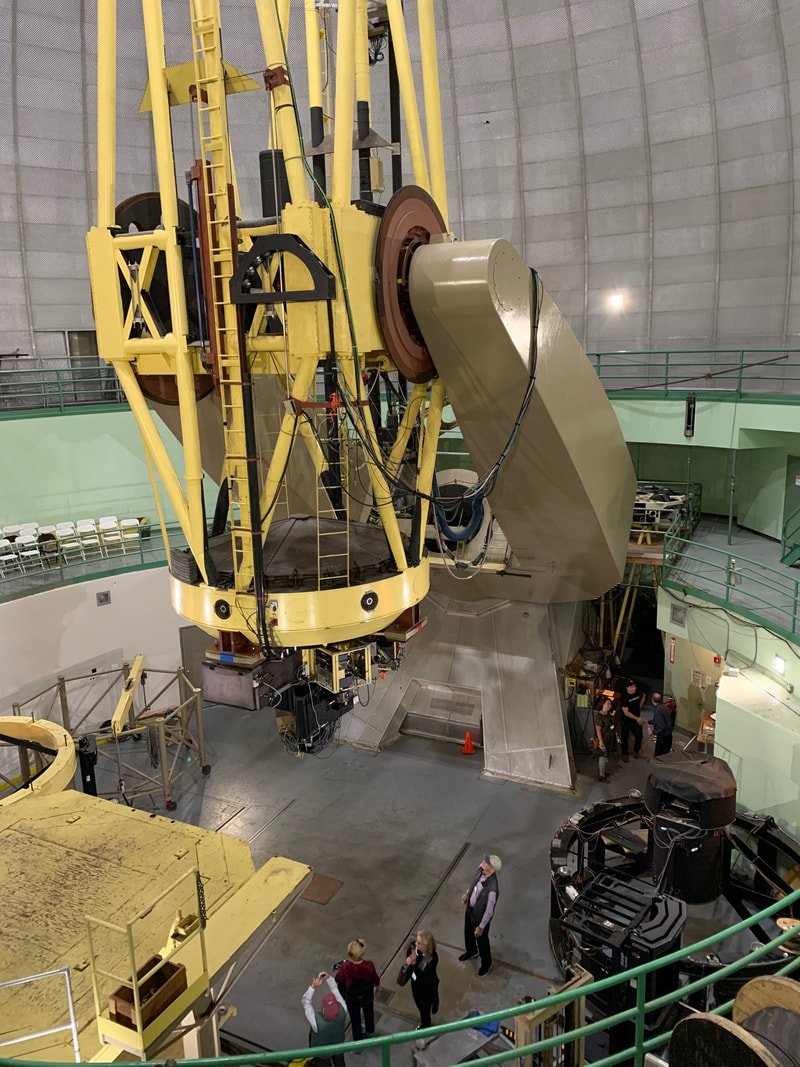 ​​This image gives you a sense of the size of the Shane Telescope. The primary mirror alone weighs 10,000 lbs. 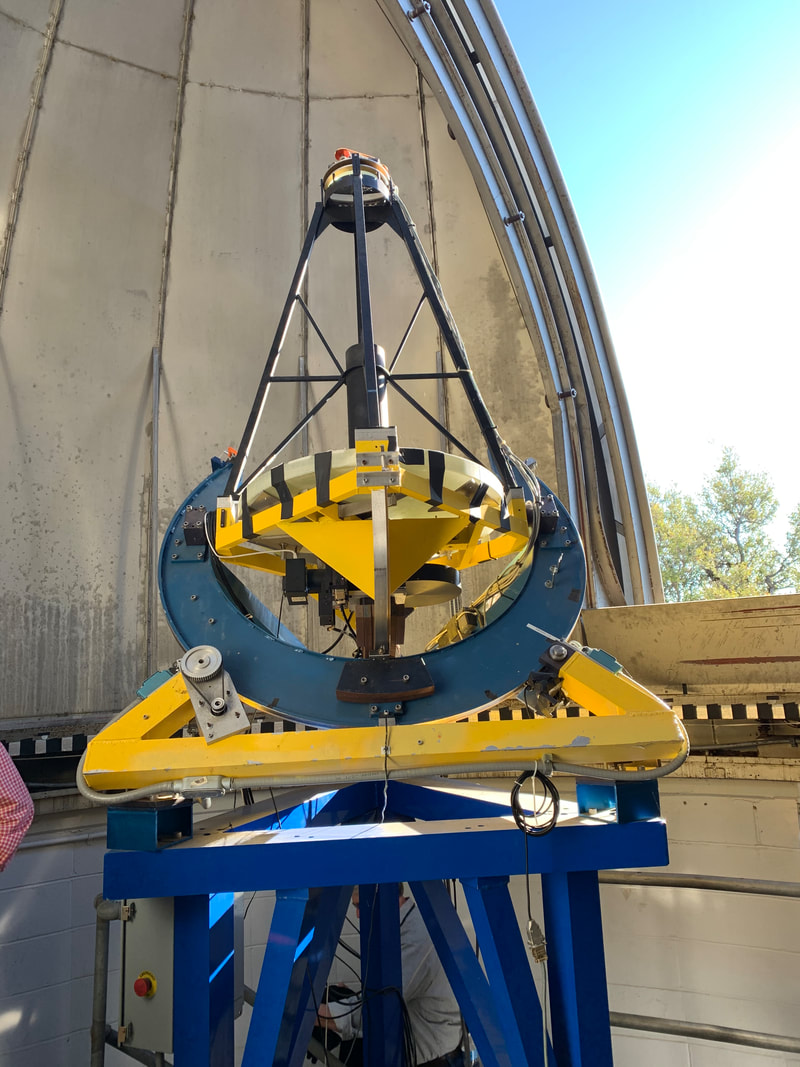 We were thrilled to see the 0.76-meter Katzman Automatic Imaging Telescope (KAIT). This was developed and is directed by Dr. Fillippenko, who conducted one of the world’s most successful searches for relatively nearby supernovae, having discovered more than 1000. Dr. Fillippenko is also a frequent user of Lick Observatory, the 10-meter Keck telescopes, and the Hubble Space Telescope.

Remarkably this telescope images over a thousand galaxies each night and does so automatically and robotically.  It has discovered more than 1000 supernova since first light in 1997.  You can learn more about this amazing telescope at http://w.astro.berkeley.edu/bait/kait.html . 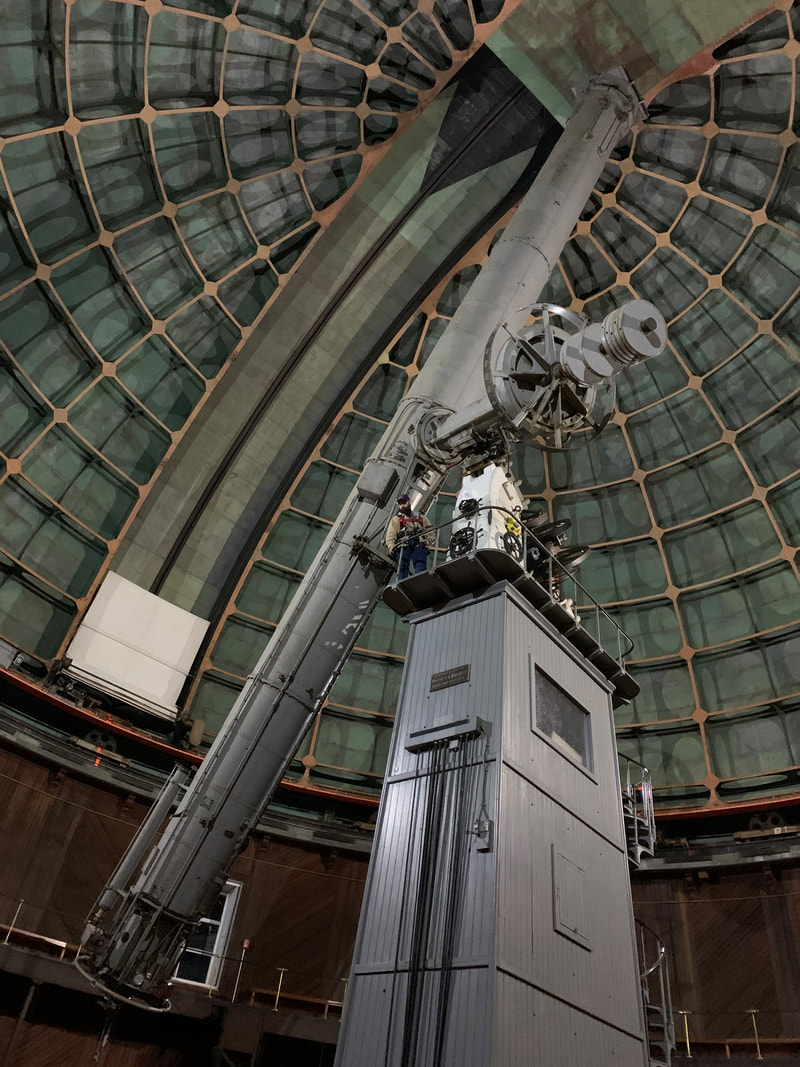 The Lick refractor was built from the endowment of James Lick.  When built, it was the worlds largest refracting telescope. You can learn about this and other telescopes at the Lick Observatory at https://www.ucolick.org/main/ . 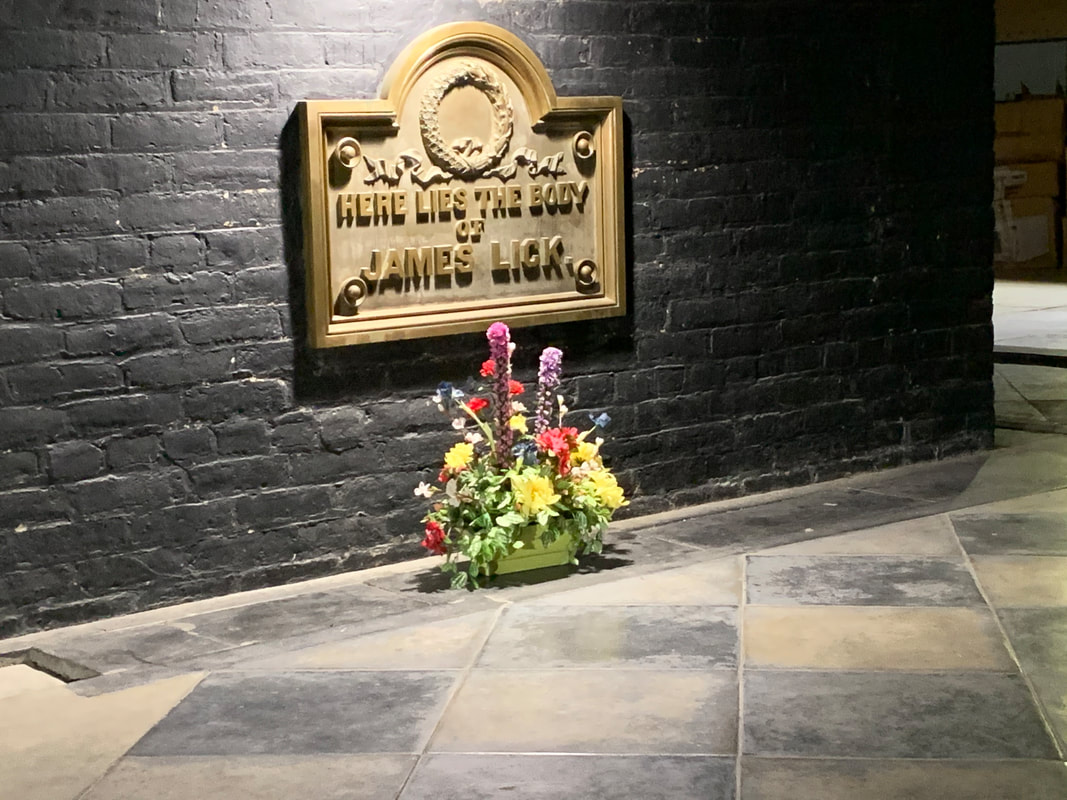 James Lick is buried in this crypt at the base of the Great Lick refractor.